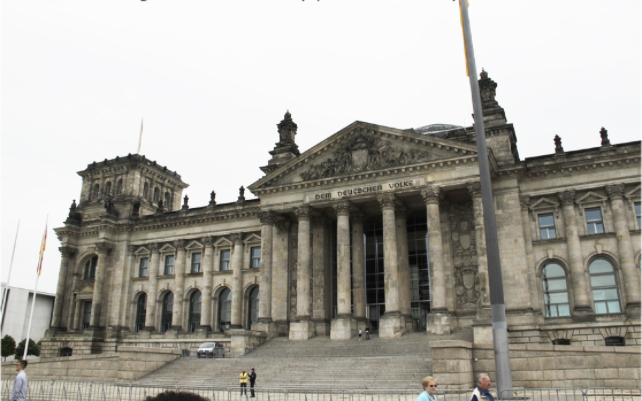 The Reichstag; Berlin, Germany. This photo was taken during the trip to Europe by one of the goer's.

“I’ve just always wanted to go [to Europe] because everyone always says how much fun Europe is. It looked like a very good opportunity to experience the culture and the lifestyle there,” Benelli said.

Led by a tour guide named Julian, Olathe East’s students saw a variety of historical landmarks in all four countries. In Poland, Olathe East students visited the Auschwitz concentration camp, Auschwitz I and Auswitchz II-Birkenau. Many of the students found the visit intriguing and acquired new knowledge about the historical landmark. Senior Jack Rigdon, who attended the Europe trip due to the presence of his friends and a desire to learn about other countries, described his experience at the Auschwitz concentration camp.

“We went to Auschwitz which was really interesting. That was probably the most different place that I’ve ever [been], probably the place that had the most historical significance… We got to see the living conditions of people that stayed at that camp. We got to see human hair, shoes, [and] things stolen from people that had to stay there,” Rigdon said.

In Germany, OE students traveled to Checkpoint Charlie and the area where the Berlin Wall once stood. There, they learned about the differences between East Berlin and West Berlin.

“We saw a place where Hitler would conduct meetings… That was a really interesting place. It was good having the history teachers there because they could tell us all about it,” Munch said.

Olathe East students went to see the historical Charles Bridge in Prague, Czech Republic. In addition, they visited the Lennon Wall. The Lennon Wall is decorated with various forms of graffiti, artwork, and designs relating to John Lennon, the Beatles, and local and global causes.

“It was just a really colorful and cool wall to see,” Munch said.

The students also explored several town squares throughout Europe. Schmideskamp described the daily sights and the culture prevalent in the town squares in Poland and Prague.

“Poland and Prague both had the big [town] squares we went to. And you’ve got the shops lined up selling cultural foods. [There were] street performers. In Poland, there were a ton of horse carriages that would take you around the city. I remember in Prague, there were people playing old songs and they were dressed up,” Schmideskamp said.

OE students went to see the Danube River. They also went on a river cruise in Krakow. Senior Sydnee Harrison loved the river cruise and considered it her favorite activity.

“It was just calming and we met new people and we talked,” Harrison said.

In addition, Olathe East students saw areas in Berlin and Prague that had been largely untouched since World War II. They also visited several castles in Prague and Dresden. Schmideskamp described the castles as “very big [and] very grand.” The students also toured multiple cathedrals and churches throughout Europe.

“Most of [the churches were] just this large vast area where the masses take place… There would be a giant altar in it and few statues there. And just surrounding [the altar] would be lots of stained glass pictures. Those were very cool,” Munch said.

Besides visiting various historical sites, the students explored the cities and spent time with their friends. Many of them gained memorable experiences and made new friendships as a result of the Europe trip.

“[Most memorable moment was] probably getting closer with everyone [because] before the trip, I wasn’t super close with any of the people. Now I am,” Harrison said.

Allin Sanchez, an Olathe East senior, enjoyed talking to and spending time with the teachers.

“We would sit out at night on the stairs and [the teachers] would give us advice. And we [played] some movie game. The teachers who got chosen to go were probably the best teachers who could’ve been chosen,” Sanchez said.

During their ten days in Europe, Olathe East’s teachers and students noticed an amalgamation of similarities and differences between Europe and the United States, regarding culture and lifestyle.

Kreimendahl found American and European teenagers very similar. He also noticed that European and American food establishments, such as McDonalds and Kentucky Fried Chicken, were nearly identical. In regards to distinctions, Kreimendahl saw much more green space in Europe than in the United States.

“There’s a lot of public parks when you’re there. They also use a lot of abandoned facilities for green spaces, like there’s an airport where the Berlin airlift took place. It’s abandoned now but there’s a huge runway so they turned it into a biking trail, like a running path. And then there’s green space next to the airport [because] you can’t build anything by a landing area, [so] they turned into a garden,” Kreimendahl said.

“Personal space is not a big thing there. [There’s] very compact streets and bumping into each other is common… Street vendors are a really cool part of culture and you’ll see that in big cities here but like I feel like it’s more interesting there… There’s a lot of people trying to sell you stuff, like tourist things. They’re very tourist cities [and] welcoming. There’s a lot of tourist places to buy souvenirs and trying to get people to go on excursions,” Munch said.

“In Germany, it wasn’t too bad because a lot of the people there spoke English. They would typically know what you were saying but in other places [Czech Republic] that we went, it was hard. There’s definitely a language barrier. People would mess up your orders for food because they didn’t understand you… There weren’t any other difficulties because we had like tour guides that could speak English very well. They mostly just led us around and that really helped,” Rigdon said.

Olathe East’s students found the Europe trip a valuable opportunity to acquire knowledge about history, various countries and different types of cultures. The Europe trip also introduced the students to a unique perspective.

“I learned kind of what it’s like not being in your native land and not knowing a language and that kind of gave me some perspective on how it might be for somebody, that doesn’t speak English, moving to the United States,” Rigdon said.

On the last day of the trip, the tour guide Julian took Olathe East’s students to the top of a mountain where they saw the city glittering with lights. Schmideskamp described the night as his favorite moment of the trip.

“The last night we’re driving around Hungary, in Budapest. Our guide, Julian, who was awesome just [played] some German songs for us. We’re driving through the city at night so it was all lit up. Very beautiful… We could see the entire city. It was awesome. Probably the best part for sure,” Schmideskamp said.

During the last moments of the night, the tour guide Julian left the students with an insight.

“Our tour guide at the end just said some people went [on the trip] not really wanting to go but they pushed themselves to go on the trip and experience other cultures. Even if you were worried at first, after you do it, you’ll realize, oh my gosh, I’m so glad I did this. Or if you didn’t then you still experienced it and you [realize], well, now I know I don’t like this type of thing,” Benelli said.