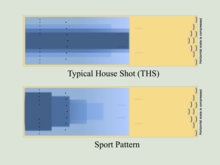 Bowling has been growing in popularity recently, and lots of youth have put hours upon hours to strive to be great. There are more tricks than most would think go into bowling. Cores of the bowling balls, oil patterns, and lane conditions are just a few of the many specs that would play a part in how the lanes break down and what you could do in order to have the most success on the lanes. On a standard day, going out with your friends, you would be getting a house shot or whatever your bowling alley uses for the casual league nights. The pattern that is put on is unique for each individual bowling alley, however, will tend to be easier than any sport pattern. House shots usually give you a pretty easy time to bowl if you use any sort of spin when you bowl. When you get to a sport shot, you will never see any bowling alley use a sports oil pattern for a house shot, the sport patterns tend to cost more to put down because they are so precise and will be more expensive than just rolling on some oil for a house oil pattern. Some of the best bowlers out there don’t have the best bowling balls out on the market but if you can read how the lanes break down, you can be just as successful if not more than your friend that paid a hundred dollars more than you. Here in Johnson County, our rising high school season gets pretty intense and brings full of energy. Many say that no one would have ever known that it was so fun to watch competitive bowling until you have seen a meet or tournament play out. Just like any other sport, bowling has tournaments and national championships. Next summer they will be held in Detroit, Michigan and last year they took place in Indianapolis, Indiana. Five thousand of the best bowlers around the country come together in one city for a week-long tournament that has oil patterns that no one could ever see. Specialists make these the toughest every year and give nothing but frustration to the bowlers. The winner of the tournament gets roughly three thousand dollars in their SMART account which is actually money that the tournament holders give out instead of real money because anyone under 18 is not allowed to get paid if you are ever wanting to play in college. Olathe East has always been known for our bowling program and hopes to strive to win state for our second time in three years.