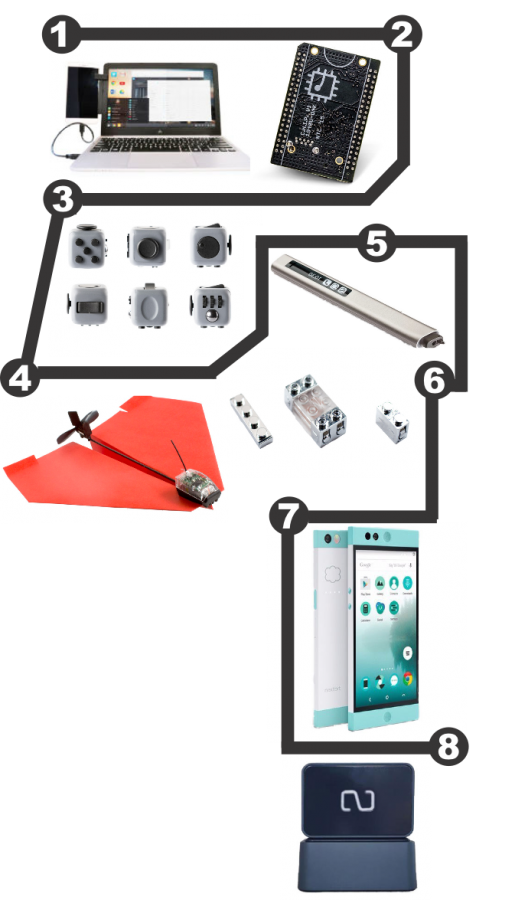 The wants of the many outweigh the wants of the few in the recently-created world of internet crowdfunding were companies are funded by small contributions from a large number of people. The environment encourages a “survival of the fittest” style funding where the
products that people want gain funding and live on, while those that people don’t want die off. As a result, the many people around the world that wish technology was cheaper, more accessible, and overall more useful have funded products with that in mind. Below are shown some of the crowdfunded products that could help ease the impact on students’ wallets and leave an impact on students’ everyday lives.

A Phone can set you back a good $250 and a laptop another $200. The Superbook uses your smartphone as the driver for its laptop shell, making this gadget much more affordable. While you phone runs the Superbook, the Superbook charges your phone. $99

Finding a fully functional computer for less than $150, even with the most basic hardware presents a nearly impossible task. Often students who just want to surf the web, check email, and play Miniclip games want exactly that: the basics. The C.H.I.P. provides the solution. The tiny, very cheap computer comes pre-installed with a user-friendly operating system so all you need is a monitor, keyboard and mouse, and you’re ready to go. $9

The impulse to tap, click, and keep your hands busy during class is a natural one. The fidget aims to keep these impulses in check. Buttons, switches, rollers, and more are formed all in a tiny cube. Audible and silent clicks and flips make it easy to choose whether or not to annoy your classmates. $19

The cliché classic in the classroom, the paper airplane, makes a comeback, but this time with a twist. The Power Up 3.0, a slide-on motor for paper airplanes, allows them to fly further and longer than ever before. In addition, the phone app allows the user to connect via Bluetooth and steer their paper creation. $50

Phree, one of the first “write anywhere” digital pens, provides a convenient new way of note-taking. Connecting to phones, tablets, laptops, etc. this pen allows users to write in the real world and have it converted to digital. The device works on virtually any surface, meaning that when inspiration hits, the Phree is ready. $200

A twist on a childhood favorite, these Lego-like bricks differ from the plastic blocks children usually play with in one key way: they conduct electricity.  Using metal connectors, these bricks can create a circuits that, when hooked up to motors, lights, speakers, etc. allow for some crazy actions and interactions. The building block possibilities are now a little more endless. $35

Not enough space on your phone? The Robin may just be the answer. This phone’s 32Gb of on-board storage, paired with 100Gb of cloud storage (similar to Google drive), provide space for a large number of files. On top of that, the Robin can tell which apps, pictures, and other files you hardly use and pushes them to the cloud. Then when you need them, you just tap the icon and the data is downloaded back. $250

This small 3D printer is powered by a piece of technology most students already own, the smartphone. The ONO uses the light from the smartphone’s screen to form plastic into 3D shapes. This allows for an easy and fairly quick method of 3D modeling. Then, if you make an item you want someone else to see, you can send them a 3D message so they can print it for themselves. $99