“It was a three-hour training and staff chose to attend. It was a lot of having staff assess their personal beliefs, learning more about terminology, learning more about how they can help support students, about what it means to display the Safe Space sticker,” Lane said.

The Safe Space sticker tells LGBT+ students a teacher chose to make their classroom a safe room to talk and be themselves. While no discrimination was reported to Lane, LGBT+ students experienced disrespect from a few teachers.  Many teachers did not understand how to aid and support LGBT+ students. She concluded education remedied unawareness.

In addition, the Olathe School District protects staff from discrimination. No teacher may be fired on the basis of sexual orientation or gender identity.

“That would be discriminatory, just like firing somebody because they were Latino, or African American, or Muslim, their race, religion, sex, creed… It would have to be based on your performance of your job,” Lane said.

She personally feels a diverse staff allows students to better relate to their teachers, and her staff ideally would match the student demographic. 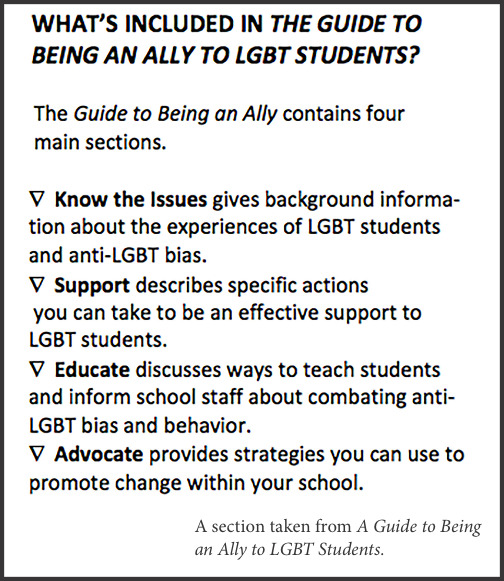 Transgender Senior Toby Mendoza brought the idea of safe space training to Lane. He hoped for mutual respect and knowledge of LGBT+ allies.

“…Let them know you’re an ally. It all comes down to respect. I feel we should respect each other as humans as long as what we’re doing doesn’t hurt anyone, and identifying as yourself doesn’t hurt anybody,” Mendoza said.

He believes everyone deserves an ally.

Mendoza worked with Lane to inform his teachers of his pronouns. To avoid the conversation with strangers, Lane emailed his teachers about his name change, followed by Mendoza sending an email himself. By the first day of school, his teachers made the change on their roll, as his family has yet to allow him a name change in the school’s system.

“What I used to have to do is go in before school starts, after summer, and explain to teachers my ‘situation’ because that’s what many people address it as. I would have ‘The Talk’ with teachers about my pronouns and name and hope they understand. And if teacher weren’t there before school, I would rush to their classroom and talk to them in a quiet tone. It would always really freak me out if they weren’t there or if they didn’t understand,” Mendoza said.

He also expressed his fear of substitute teachers calling the wrong name to Lane. He hopes for teachers to mention a transgender student’s pronouns in their sub-notes to avoid conflict.

Name changes require a form to Amend Student Records with parental consent. The form allows the Olathe School District to change a name on transcripts, educational records, and high school diplomas. Lane authorizes reprints of diplomas, should one display the wrong name for a student. Without the support and consent of a student’s parents, the school legally can only call a student by their preferred name.

“We don’t have the power to change your birth certificate, but we can change what’s in our system, what comes out of the Olathe School District,” Lane said.

Director of Secondary Education Jim McMullen calls parents to verify consent on amending records, if the student is under 18 years-old. After, he sends the form to District Technology.

“Once it goes to technology, how quickly it goes in the system, usually pretty quick. Then it rolls over each night…from the time I would talk to your parents, you can assume after that, within 48 hours… It’s quicker than a student transfer,” he said.

College applications and credit requires a legal name. Lane recommends making colleges aware of which name is linked to Olathe East and on a birth certificate.